Oct 6, 2020
The Best PC based CRM Software for 2020 integrates Dialing on Softphone, Android and iPhone

Aug 7, 2019
Sync Calendar Attachments from Outlook to Google with CompanionLink

Jun 18, 2019
DejaOffice CRM-syncs PC, iPhone and Android while Google Calendar is Down

May 21, 2019
CompanionLink relaunches PC based Sync App for Salesforce Sync with Outlook

May 20, 2019
CompanionLink launches DejaOffice Personal CRM with Apps for Windows, Android and iPhone

November 3, 2017
How to put Google Calendar on your macOS Wallpaper

October 4, 2017
How to put your Microsoft Outlook Calendar on your Windows Wallpaper

September 26, 2017
How to put Google Calendar on your Windows Wallpaper

July 6, 2015
Map Nearby Contacts, Calendar Events, and Tasks in DejaOffice

February 18, 2015
CompanionLink Connects Outlook for Mac 2011 and 2015 to Google Calendar and Contacts

January 7, 2015
The Ultimate Outlook Sync for Santa's Phone and Tablet

October 14, 2014
Share Outlook Calendar and Contacts with Family and Friends Without a Monthly Cost

April 30, 2014
Top Google Outlook Sync is Free to Try and Cheap to Buy

April 21, 2014
Free transfer of Outlook and Google Contacts and Calendar to Nokia X

April 27, 2012
Business Wire - How to Sync the NOOK Tablet with Microsoft Outlook...

February 10, 2012
Business Wire - How to Sync the Motorola DROID 4 with Microsoft Outlook...

May 6, 2011
Business Wire - DejaOffice to Appear on Fox Business Network...

CompanionLink to Support Outlook Sync with Android Phones and Tablets Announced at CES 2011...

Subscription-free Wireless Sync Between ACT! by Sage and Phones...

CompanionLink Announces PC Sync for Palm Pre Plus on AT&T...

CompanionLink Offers Two-Way Sync Between ACT! 6.0 and the Latest Smartphones and Tablet Devices

Introducing DejaOffice for iPad and iPhone...

CompanionLink syncs desktop with Palm Pre Plus and Palm Pixi Plus...

How to view Android contacts by last name...

CompanionLink will sync PC data to Nexus One...

September 18, 2006
CompanionLink announces support for new BlackBerry Pearl and all other RIM devices... 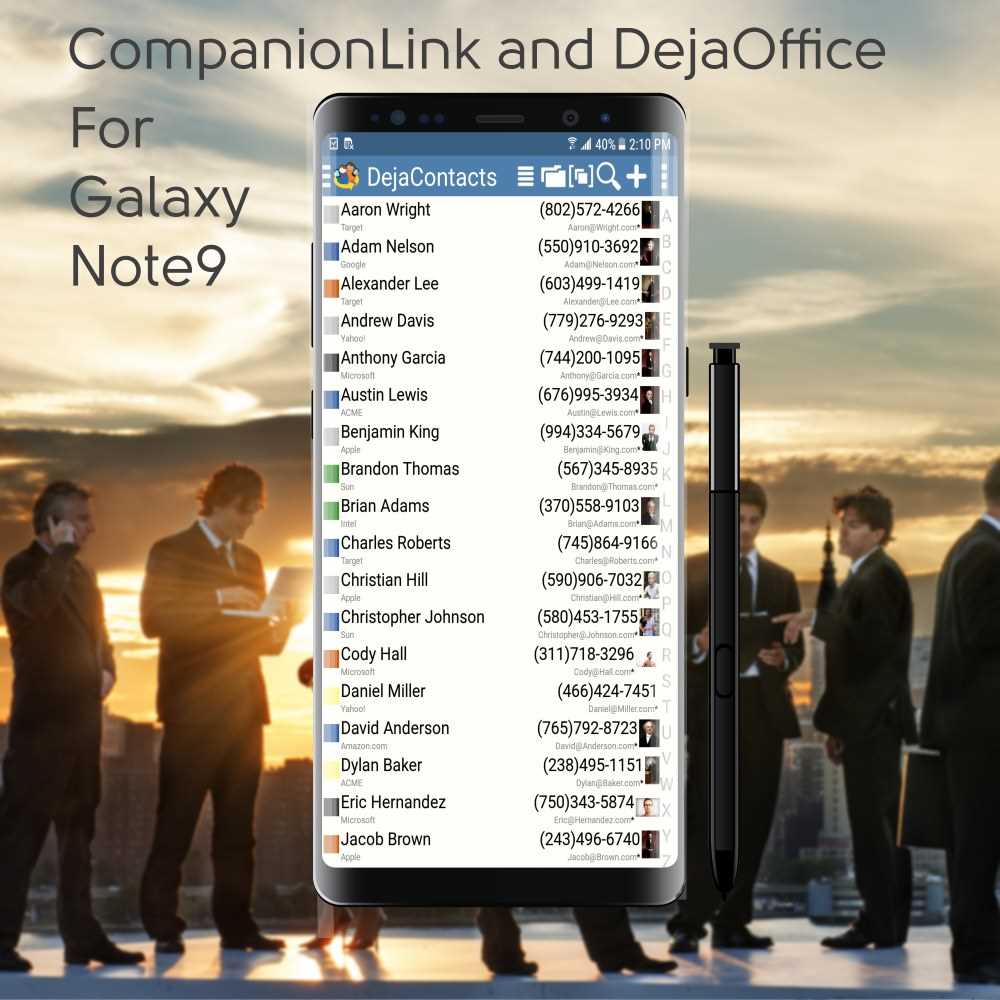 Excellent program
By James A.
CompanionLink for Outlook
It's essential for me to be able to sync my Address Book, Calendar, and Notes from my desktop Outlook to my Android phone. I have a new Samsung Galaxy S21. My old Android sync software would not sync with my new phone. CompanionLink provided the solution. It works great, and after initial sync, it's blazing fast now. Very usable. I had one technical issue, and tech support was very responsive, and got me straightened out right away. Very happy with this product.
syncing phone and new laptop
By Debra P.
CompanionLink for Outlook
My call was answered right away - that in itself was amazing.

Then Tiffany knew exactly what to do to get the sync working properly.

I was never more impressed with any tech service I've ever had than I was with Tiffany's. I'd leave 10 stars if I could!


Awesome Help from Michael K today
By Fiona F
CompanionLink for Outlook
Micheal got all my problems sorted out, set me up again and ensured that I know what to do going forward. He has the patience of a saint!
Excellent service done by Tiffany D. !!!
By Richard
CompanionLink for Outlook
I was not able to synchronize my Outlook calendar via DejaOffice to my Android phone.
In a very short response time I got an excellent description/to do list and after operating this my problem was solved on a perfect level.
Big compliment to Tiffany personally and best regards from Munich/Germany to the entire support team :-)

Great tech support from Tiffany D
By Mark S
CompanionLink for Outlook
I had a difficult issue that was finally resolved by doing a 'Repair' on 'Microsoft 365'. It was a patient tech indeed that worked through 45 minutes!
Conley H. Rocks
By Roger M.
CompanionLink for Outlook
Every time I need technical support I wind up with this guy, and I'm glad that I do. He never fails to fix the problem, and he does it in minutes.
Tiffany was really helpful
By Doug Gower
CompanionLink for Outlook
I am the IT person supporting a new Companionlink customer. It was a complicated setup because the customer has many different contact lists and we had problems configuring syncing to her iPhone. Tiffany figured it all out and was very patient. Her skill was appreciated!
Tiffany & Michael Are Saints and Rawk-Stars
By Michael W.
CompanionLink for Outlook
I have been searching for a long time for a new option to sync (non-cloud) between Outlook and Android, but had a bunch of problems getting started. Between Tiffany and Michael, I am now set up brilliantly. Both of these rock stars are amazing - patient, professional, knowledgeable. Amazing customer service - I instantly switched from the trial to the paid app!!!
Product is Everything I Need and Want
By Ann G.
CompanionLink for Outlook
Love this product that syncs my Android phone with my PC. Works great and the customer service is consistently and exceedingly outstanding.
Easy
By Maggie C
CompanionLink for Outlook
Easy to use and reliable
PROFESSIONAL PEOPLE WHO CAN COMMUNICATE
By JAY W
CompanionLink for Outlook
THE TITLE SAYS IT ALL..EVERY ONE KNOWS WHAT THEY ARE DOING AND WHAT NEEDS TO BE DONE AND MOST OF ALL THEY CAN HELP US ON THE OTHER SIDE UNDERSTAND AND APLY THEIR KNOWLEDGE.
snyc from android to outlook
By Marvin W
CompanionLink for Outlook
74 years old and resist change! My new phone wouldn't support my old sync software so looked for a software that would support my Galaxy S20 FE 5g. Found Companion Link, installed, and needed only 1 phone call to support and am up and running. Great product and great service.
Michael was Fantastic! love Companion Link!
By LBC
CompanionLink for Outlook
Michael helped me sync OUTLOOK and Google calendars and contacts perfectly. I had challenges in the past and he repaired issues and got it up and running flawlessly!
Superb support experience
By Connie Z
CompanionLink for Outlook
I just finished a support call with Michael, who provided an excellent experience for me. I am a long-time customer of CompanionLink and really value the product, but when I upgraded a couple of years ago I (foolishly) changed some settings and ended up not syncing my Contacts properly. It was quite messy because I had new contacts in several different accounts and couldn't figure out how to resolve this.

Michael patiently and skillfully walked me through all of the steps to make sure all of the new items were captured, and then clean up duplicates in Outlook, delete the old data in Android and then re-sync nice fresh and clean data. Along the way he was kind enough to teach me what I needed to know about how the software functions.

I am very grateful and now have this huge weight lifted off of my shoulders in time for the holidays!

I regularly recommend CompanionLink to friends and business associates, but until now had not had the opportunity (and pleasure) of using support help.

Thank you Michael... you rock!!


Exemplary Customer Servie
By Phyllis M
CompanionLink for Outlook
Just worked through a session with Michael with multiple issues with syncs and duplicate entries. It's been a while since I have had someone so patient and wanting to be sure that I got the issue resolved. I had two previous calls with technicians that had not fully resolved the issue so to have this complete, I am very happy and satisfied. Thanks, Michael!
Fantastic Customer Service
By Charlie H
CompanionLink for Outlook
I've used DejaOffice for a while and just developed a problem with syncing. Conley sorted me out very quickly and patiently - I'm no techie! Impressive service - highly recommend the product and service.