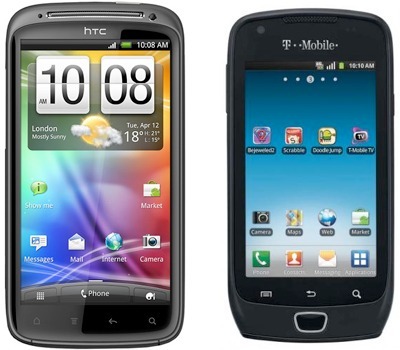 The HTC Sensation looks like it will be just that – a sensation. With 4G speeds, the latest version of HTC Sense, a dual-core 1.2GHz processor, 4.3” display, 8-mexapixel HD camera, and more, the Sensation is poised to be one of the top Android phones releasing this summer. And at $199 it is priced to compete. We have yet to try one out ourselves, but from everything we’ve seen this will be the phone to get for those looking for a powerful Android experience. Look for it in Walmart stores June 12th and T-Mobile locations by June 15th.

That said, not everyone wants to spend $199 on a new phone. That’s where Samsung Exhibit 4G comes in. Providing a solid Android experience atop a 1Ghz processor handset, the Exhibit 4G should prove to be a popular phone among those looking for an entry-level smartphone. While it may not be the most powerful Android phone available, it packs plenty of features to satisfy the casual user’s needs. And at just $79, it’s priced to move. T-Mobile has yet to provide a set release date, but has promised we will see the Exhibit 4G this June.

Whether you’re looking for the latest, powerful Android handset or are hunting for a feature-rich phone at a great price, you’re sure to find something you’ll love soon. And, of course, with DejaOffice and CompanionLink you’ll be as productive as ever on your new phone!

Once released, we’ll be testing these phones to ensure they work as expected with DejaOffice and CompanionLink, but at this point we don’t foresee any issues.