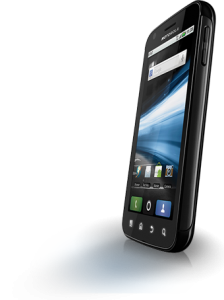 The Motorola Atrix 4G, the phone that won widespread admiration at CES 2011, was released to the public on AT&T’s network yesterday. To say that this is just another Android phone would be an understatement. In addition to being one of the few phones to support the new 4G networks, the Atrix features the unique ability to transform itself into a powerful media center or laptop via a series of peripheral docks.

The multimedia dock is more play than work, allowing users to easily connect their Atrix to their TV and enjoy videos, music, and more. While that is likely to be a popular feature among home theater enthusiasts, I’d like to focus more on the second docking option: the laptop dock. The laptop dock allows Atrix users to connect the phone to a lightweight laptop frame. This then runs a “web-top” application, allowing users to harness the productivity of the laptop form, all from their mobile phone. In theory, this could drastically improve your productivity on the go. While you don’t save much space when compared to carrying around a phone and tablet/small laptop, you do benefit from having everything easily accessible on one device. It may sound like a small thing, but it can have a huge impact on your mobile productivity!

The laptop dock is something we have not yet seen from any other mobile phone, and it certainly has the potential to change the way we work while on the go. However, it remains to be seen just how well it works in the real world. Initial reviews generally praise the phone, but suggest skipping the laptop dock. They state that, while the concept is widely adored, the actual application is a bit clunky and too expensive. That said, this is merely version 1. The technology has a lot of room to advance, get faster, and come down in price.

With tablets already changing they way we work on the go, do you think the unique docking features of the Atrix have a chance to put a dent in the popularity of the tablet? Or will they simply manifest as marketing gimmicks that ultimately die out?

Note: Are you looking to sync the Motorola Atrix 4G with Outlook or another popular personal information manager? We have you covered: check out ComplanionLink for PC and DejaOffice for Android!