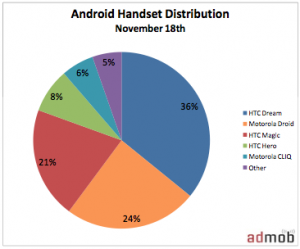 In the October 2009 issue of AdMob Mobile Metrics Report, the company has a telling chart that lists the phones people are using on the Android platform.  While the Droid has been available for less than one month, it has managed to grab nearly 25% of the Android market.

CompanionLink continues to align closer with Android devices.  CompanionLink already offers a two-way sync solution between PC and Google, which natively feeds the address book and calendar on Android phones.  CompanionLink is also working on a two-way USB sync between PC and Android.  This will allow users to sync PC (ie – Microsoft Outlook) contacts, calendar, tasks and notes to their Android using the USB cable that came with their device.