The OnePlus 9 is powered by Qualcomm’s latest Snapdragon 888 SoC, and our test unit had 12 GB RAM and 256 GB of UFS 3.1 internal storage. As expected, OnePlus has opted for the fastest Qualcomm chip available, and it goes without saying that the performance of this device is top-notch. There was absolutely no lag in day-to-day operations, or in any of the usual apps or when switching between apps. Gaming was stutter-free and totally enjoyable at the highest settings.
- First Post: OnePlus 9 performance - June 02, 2021

The OnePlus 9 nails a lot of things—it's fast, has a great screen, charges obscenely quickly, and it's a good value next to the 9 Pro. From the moment you pick up the OnePlus 9, it's full-speed ahead with smooth animations and scarcely a hint of lag. I really enjoy using this phone, and I'm willing to overlook shortcomings like the middling primary camera and only kinda fast wireless charging. I love that I have basically stopped worrying about how much charge this phone has. If I find I need to step out (an admittedly uncommon occurrence these days), I know I can plug in the Warp Charger and have more than enough juice by the time I've put on pants and found my keys. OnePlus has resisted smartphone industry trends and made this phone cheaper than its predecessor. With the OnePlus 9 at nearly a grand, the $729 OnePlus 9 is more appealing than the last few non-Pro devices. The lack of a telephoto camera is a bummer, but the new ultrawide sensor is impressive. It takes great macro shots and doesn't have any detectable edge distortion. I just wish OnePlus would take a closer look at the way its processing smudges fine details. It's the last thing that really keeps OP phones from competing with the imaging leaders.
- Android Police: Should you buy OnePlus 9? - May 1, 2021

The OnePlus 9 is the latest flagship - alongside the OnePlus 9 Pro - from a brand that, despite shifting its phone strategy to compete directly with other premium handsets, had until now kept coming up short in one category: cameras. To address this deficiency, OnePlus has partnered with legendary photography company Hasselblad in a three-year plan to improve the photo capabilities of its smartphones.
- Tech Radar: OnePlus 9 in two minute! - Jully, 2021

The OnePlus 9 has the top chip available to Android devices, Qualcomm’s latest Snapdragon 888 processor, with at least 8GB of RAM and 128GB of storage. It matches the 9 Pro for speed and smooth experience, making it one of the fastest-feeling phones available. It also has very good battery life, only needing charging every other night. It lasts just under 47 hours with the screen used for 5.5 hours in various apps, meaning a single charge lasts from 7am on day one until at least 5am on day three.
- The Guardian: OnePlus 9 a good, well-priced top-spec smartphone - 26 Apr 2021

The OnePlus 9 is a very good phone that holds its own against other (often more expensive) flagships. It has all the things that truly matter: a great screen, excellent performance, good battery life, and a capable camera. But for better or worse, it still doesn’t feel quite like a device that’s well-suited for the mainstream. It misses a couple of features present on the competition like a stabilized main camera and broad 5G support. Instead, it offers some neat but arguably not as useful extras, like really fast charging and an excellent ultrawide camera. It leaves this device in somewhat unusual territory: it’s good and well-priced, but it’s not the Android flagship I’d recommend to just anyone.
- The Verge: OnePlus 9 semi Pro - Mar 26, 2021

Options to sync OnePlus 9 with Outlook

There are several ways to use OnePlus 9 with Outlook and Office 365.

1. Sync with Outlook App on the Phone

If your Outlook folder is an Exchange or Office 365 folder, click here for a detailed setup guide to sync with OnePlus 9.

For IMAP and POP3 folders, you can sync Outlook Contacts and Calendar with Google. Then on the phone, use Android Contacts and Android Calendar. Click here for a detailed setup guide.

For any foldder type, CompanionLink can sync Outlook Contacts, Calendar, Tasks and Notes. This works with any version of Outlook. 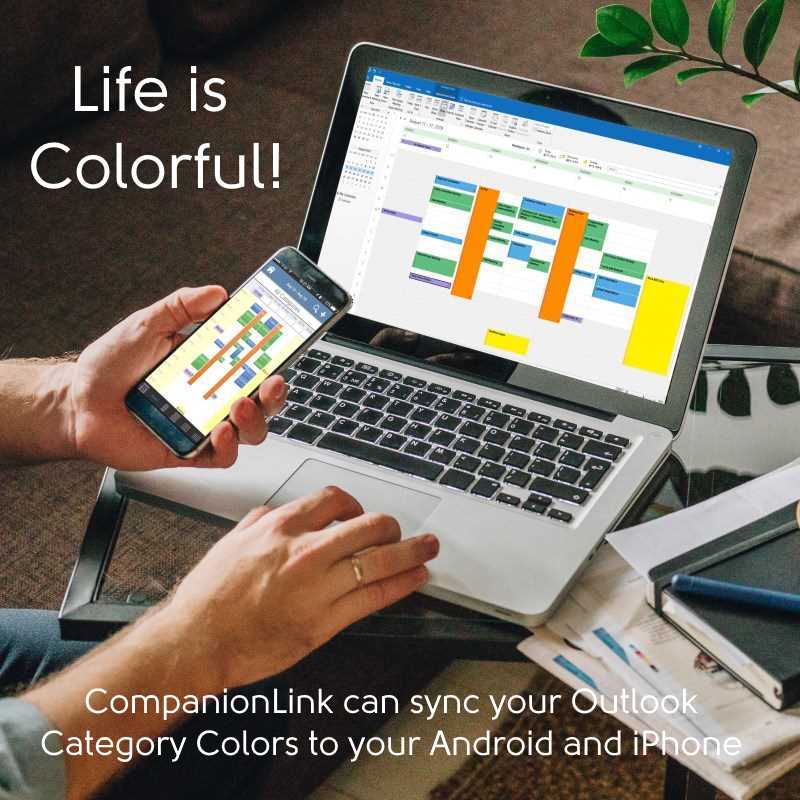