The first thing you’ll notice when you open the latest update of DejaOffice for iOS is the crisp new graphics. We’ve refreshed the entire app with Retina graphics, perfect for those with the iPhone 4/4S and the new iPad. Beneath the fresh look, though, there’s even more…

We’ve added the ability to sync pictures to DejaContacts. Now you’ll always be able to attach a face to the name of your next meeting. Due to the way the iPhone handles USB sync, this feature is only available when syncing via WiFi.

We’ve redesigned the categories app to make it faster and more reliable. Category colors will now sync from your computer to DejaOffice. If blue equals “Sales” on your PC, it will equal “Sales” in DejaOffice. A small improvement that makes a big difference!

The process of adding or editing data has been streamlined.  We’ve made use of popovers to allow you to quickly and easily edit categories, times, dates, priorities, contact links, and more. This adds up to a more efficient workflow for you. And who doesn’t want that?

Buttons are easier to tap, data loads faster, you can swipe between records from the details view, and the search function has been improved. Not only that, we’ve squashed a number of pesky bugs. Check out the full release notes for a list of what’s been fixed.

DejaOffice for iOS gets better with each new release and we’re excited for you to download this latest version! It’s free, and in the App Store today. Let us know what you think in the comments below.

Introducing DejaOffice 1.3 for iOS was last modified: May 2nd, 2012 by David Z 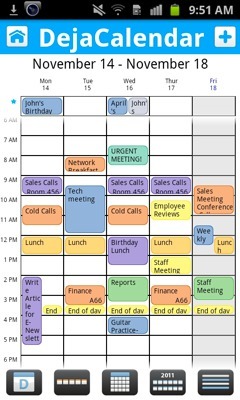 If you’d like to start using these great new features, just head over to the Android Market to download DejaOffice 1.12.5 today! END_OF_DOCUMENT_TOKEN_TO_BE_REPLACED

Rearranging Your Calendar Is Easier Than Ever With DejaOffice 1.12.5 was last modified: November 22nd, 2011 by David Z

DejaOffice 1.2.4 should be arriving in the App Store as you read this post. This update contains a number of new features, improvements, and bug fixes. The full release notes are included below, but I wanted to highlight one feature that I’m sure many of you will appreciate: Password-protected data.

This feature allows you to secure sensitive data on your device by either hiding or masking your private contacts, tasks, and memos. Private records require a password to view or edit, keeping your data secure.

Configuring private records is simple. To mark a contact, task, or memo as private, simply tick the checkbox labeled “private” when editing or creating it. Before you notice any change, you’ll need to adjust the settings for private records. Go to the “Settings” menu in DejaOffice and select “Private Records.” There you can choose to Show Private (always show private records), Mask Records (replace text with ***), or Hide Records (completely hide private records from view). You’ll also find settings for syncing private records, privacy timeouts, and passwords.

I should note that if you choose to “Hide Records” you will need to select the “DejaContacts” (or DejaTasks or DejaMemos) menu and choose “Show Private”. This will prompt you to enter your password to reveal your hidden records.

Of course, Private Records are just one of the many updates we’ve made in DejaOffice 1.2.4 – see the list of changes below, then head over to the App Store to download your update today!

Amazon has worked hard to help widen and curate the distribution of Android apps. Amazon has their own app acceptance process, which they say will guarantee that only meaningful and legit apps will be distributed on their Appstore.

We want to make it easy to download DejaOffice, no matter which app store you prefer using. Therefore, we’re pleased to report that DejaOffice is now available in the Amazon Appstore!

We hope you’ll find the increased availability of DejaOffice useful, and we want to hear your feedback. We’d love for you to leave us a review in the Amazon Appstore! It helps us to constantly improve our app, as well as where we distribute it.