For power users who need to stay productive on the go, the ability to go a full day on a single charge with the Droid Razr Maxx is a huge benefit. In fact, the Droid Razr Maxx has many great features that make it a powerful phone for business users. But like its younger brother, the Droid Razr, it doesn’t offer built-in sync for Outlook, or any number of other popular CRM platforms for that matter. So how do you sync Outlook contacts, calendars, tasks, and memos with the Razr Maxx?

The answer is simple.

Use CompanionLink. Syncing is as easy as downloading DejaOffice on your Droid, installing CompanionLink on your computer, and then configuring your preferred sync method. We’ll walk you through each step, and we’ve got free support if you need a hand.

So what are you waiting for? Unleash the full potential of your new Droid Razr Maxx with CompanionLink and DejaOffice. Download your free trial today!

How to Sync the Droid Razr Maxx with Outlook was last modified: January 26th, 2012 by David Z

In anticipation of Verizon’s upcoming release of the Galaxy Nexus, I wanted to post a quick update. We actually got our hands on the UK model for testing and have had some time to play around with it. Check out our thoughts in the video below!

As for syncing the Galaxy Nexus – the situation is as we expected. Local WiFi, CompanionLink Secure Hosted, and Sync via Google all work as intended. The Galaxy Nexus does not have an external SD card slot, which means that USB sync will not work with DejaOffice on this device. That said, we’re already working on a fix, so stay tuned. In the meantime, sit back and enjoy the video we’ve made.

An Update On the Galaxy Nexus (With Video!) was last modified: November 29th, 2011 by David Z

At least according to a recent study by Robert W. Baird & Co. 83% of consumers surveyed said that they could not do without a computer for the foreseeable future. According to consumers, tablets are cool. They’re fun. They’re wildly popular. But, for the majority of users, they simply cannot replace a computer. Not in their current form, anyways.

When compared to a tablet or smartphone, what is it that makes the PC so indispensable to the vast majority of the population? It’s not a keyboard or mouse – tablets can accommodate traditional input devices such as these already. It’s not power. Well, not for most users anyways. Today’s tablets and smartphones can easily handle the average users’ needs. For those that need more, it’s only a matter of time before mobile devices catch up to traditional PCs in terms of processing power, RAM, graphics, and storage. So if it isn’t these things, what is it?

We’ve said it before – computers as we know them are going extinct. Devices like the Motorola Atrix and the Asus Transformer already offer tools for attaining the “desktop experience” from your mobile. Soon, many more mobile devices will offer the ability to dock to the traditional monitor, keyboard, and mouse setup. Your “computer” will actually be just a shell powered by your mobile device.

So 83% of consumers are in luck – they won’t have to go without a computer in the foreseeable future. What they may not realize, however, is that their computer will, in fact, be a tablet or smartphone.

Study Shows Computers Are Here To Stay – But Are They Really? was last modified: September 15th, 2011 by David Z

Android, as a platform, has seen growing popularity since its inception. Before Android, Apple had a tight grip on the changing smartphone market. They were one of the first, and certainly the most influential, to transform the smartphone into what it is today. But, as we all know, Apple’s OS only works on Apple devices. That’s where Google stepped in. They created an open source OS that existing phone manufacturers could use. The use of Android as an OS spread rapidly, catching up with Apple’s market share in little time.

Today, that popularity continues to rise. A recent survey by Market Force shows that 34% of those surveyed would like to buy an Android phone, while only 21% indicated they wanted an iPhone. This is no surprise to us – we can see a similar trend among our customers.

Arguably, one of the reasons is that Android runs on more devices. But I think there’s more to it than that. Android is an open platform that’s designed to allow users great customization and flexibility. People like to own their experiences. The Android platform allows them to do just that. With it, you can make your phone as fun, simple, extravagant, or productive as you like! The very same device can be a portable arcade as easily as it can be a mobile productivity hub.

Now, obviously this is just one survey. New Android phones will continue to be released, and Apple is likely a few months away from releasing the iPhone 5 and iOS 5. How this will affect people’s buying decisions remains to be seen. For now, it’s safe to say that Android phones aren’t going to go away any time soon!

AdMob has just published a report comparing smartphone platforms from November 2009 and February 2010. As expected, Android has shown the most growth, almost doubling its market share in 3 months (most likely thanks to the Moto DROID). Windows Mobile continues to lose share, and Palm is also showing signs of distress. The Blackberry and iPhone remain largely unchanged. 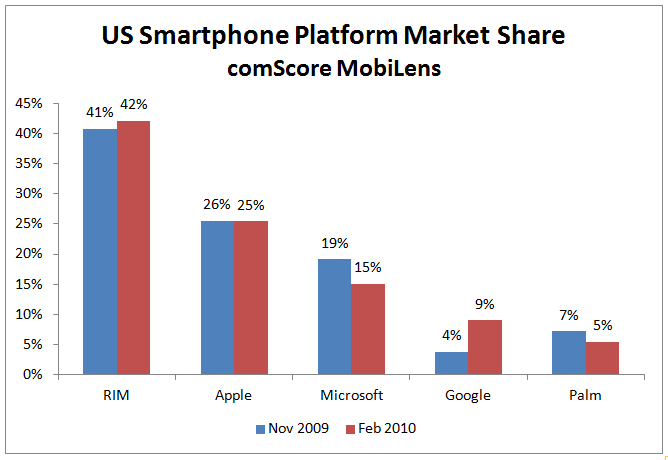