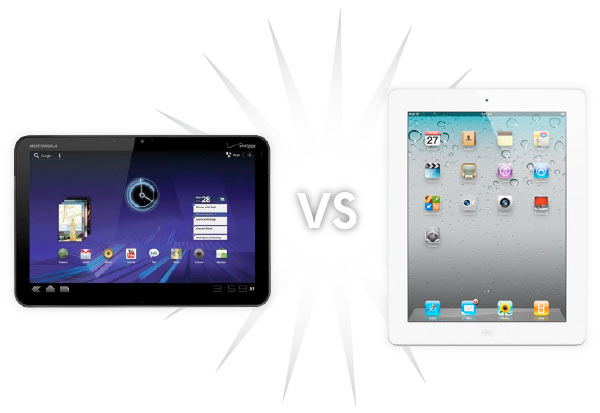 By now, you’ve no doubt seen countless reviews and comparisons of the Motorola Xoom and Apple iPad 2. They talk about the size, the weight, the features, etc. and post galleries of images and embedded software development for your viewing pleasure. By all means, they are certainly providing helpful information.

That said, I want to compare the two from a productivity standpoint. I want to take a look at the two devices and answer the following question: Which device will allow you to be more productive while on the go?

In order to accomplish this, I’ll be looking at three distinct areas:

The Xoom and iPad 2 aren’t drastically different when it comes to hardware. Both devices have a screen size of ~10” (though the Xoom has a higher resolution), both are running dual-core 1GHz processors, both have front & rear facing cameras, both feature batteries that will last all day, and both share similar dimensions & weight. When it comes down to it, neither device is especially better than the other in terms of tech specs. The Xoom’s screen resolution is a bit higher, its cameras are a bit better, and it will soon support 4G speeds and Adobe Flash. The iPad 2 is thinner, lighter, has higher built-in storage options, sells for less money, and is available on multiple networks.

The Verdict: From a technical specification standpoint, the devices are quite similar when considering mobile productivity. They both offer large screens, they’re both quite portable, and they both have plenty of power to run your mobile office. Everything else aside, it really comes down to personal preference.

I am quite impressed with how far Android has come lately. Many of the features found in Android 3.0 are impressive, and the level of customization the device allows is great. Widgets offer at-a-glance information, the freedom to arrange home screens at will allows better organization. Overall, with a small investment of time, the Xoom can be setup to make you extremely efficient on the go. However, it feels surprisingly slow when compared to iOS 4.3 on the iPad 2 – and that’s saying something. I would never have called the Xoom slow before, but setting them side by side shows just how well Apple has optimized their iOS to take advantage of the hardware.

The iPad 2 does not introduce many new features when it comes to usability, but rather optimizes existing ones.  Everything feels even faster than before. Anything that involved more intensive graphics power simply screamed on the iPad. Early testing seems to agree that the iPad 2 is around 2x faster than the Xoom when it comes to graphics power. As a result, everything the iPad does quickly it does beautifully as well, with smooth animations and transitions. It is clear that Apple has invested a lot of time perfecting the experience. This unique experience often translates into a higher level of productivity.

The Verdict: It’s a close call, again. Many users will prefer the level of customization and organization that the Xoom offers. Being highly organized is a crucial part of being productive on the go. On the other hand, the speed that the iPad 2 manages to handle everything you throw at it easily makes up for its more basic organization options.

Android sets up via Google. iOS, via iTunes. The different setups mean different levels of compatibility, whether with other devices or programs. That said, it’s the apps that can make all the difference.

The iPad 2 supports all existing iOS apps right out of the box. Essentially, if your setup works on an iPhone, iPad 1, or iPod Touch, it will work just fine on the iPad 2. The Xoom has a little catching up to do in this area, simply due to the fact that it’s the first tablet with Honeycomb. Since Honeycomb is the first official tablet version of Android, the platform has some catching up to do. That said, existing Android apps work (even if they’re not optimized for the tablet) and, as such, the Xoom supports most existing Android solutions.

At the end of the day, the more popular solutions will work just fine. For example, DejaOffice works great on both the iPad 2 and the Xoom. A quick install of the app is all it takes to start getting all your contacts, calendars, tasks, and memos over to the tablet.

The Verdict: The iPad 2 wins when it comes to sheer numbers, but the Xoom and Android are quickly catching up.

So Where Does This Leave Us?

It’s actually a close call. Both the Xoom and the iPad 2 have their strengths. So what tablet should you get? Ultimately, the decision is up to you, but in my opinion the winner is the iPad 2. The Xoom is a great product with its powerful customization options and 4G data speeds, and Android 3.0 will only continue to get better. However, I’d have to say that overall the iPad 2 is simply the best tablet currently available. With it’s incredible speed, sleek Apple design, lightweight form factor, and intuitive UI, it has set the bar high for mobile productivity in the tablet market and has left competitors playing catch-up.

Of course, that’s my opinion – I’d love to hear yours in the comments!