This account is our QA team’s experience and is not in any way a definitive guide.  We offer it as it may assist others to set expectations with the new Windows 8, Windows 8 Pro and Windows 8 Enterprise operating systems.  Windows 8 RT for Surface is a tablet OS and is not presumed to run the ACT! application.  We will confirm this when our Surface device arrives.

ACT! versions that work on Windows 8 without issues

CompanionLink works with all versions of ACT! 3.0 and higher.

ACT! versions that work on Windows 8 was last modified: October 26th, 2012 by Rushang

This is a big day for CompanionLink.  Gene Marks, contributor for Forbes.com, mentioned CompanionLink in the same article as some heavyweights such Amazon, Evernote, and Square.  The article is about Gene’s top 9 apps that he recommends salespeople must have on their smartphones.

This is not a new company or two dudes working out of a garage.  My clients and I have used CompanionLink’s products for a decade.  I also like the fact that they’re not in bed with any one software maker – they make synching products for them all.

CompanionLink has always felt there is strong value in offer mobile business professionals a reliable and platform-agnostic way to integrate their phones with their business contacts, agenda, and notes.  Our mantra has always been “Your data, your device.”  We’re proud to support the entire spectrum of major mobile platforms and let you choose which device to use and how you wish you keep your data integrated. We do it with integrity and without farming or selling your data to advertisers because we feel that’s what business professionals really want.

Today’s mention by Gene was a testimonial for our mission.  Thank you, Gene.

We launched DejaOffice for NOOK Color and NOOK Tablet in late April. We’re off to a great start with a 5-star average for reviews. Some of the comments have been very supportive for our cause.

“I love being able to color code my activitites and tasks. It is nice to have tasks, memos, contacts and calendar all in the same program!”

“Best Suite for Nook”
“Wish i would’ve found this a long time ago. Works perfectly”

DejaOffice on NOOK is off to a great start with 5-star reviews was last modified: May 14th, 2012 by Rushang

Read the full Windows Guides review here and be sure to check out the giveaway here too. You can download a 14-day free trial of CompanionLink for Outlook or CompanionLink Professional at www.companionlink.com/outlook.

More information about CompanionLink for Outlook can be found at www.companionlink.com/outlook

A post on the Forbes Investor blog by writer Marc Gerstein highlights his frustrating experience spending hours trying to sync his BlackBerry Tour with Outlook 2010. Gerstein points out that his frustrations are shared with many BlackBerry owners facing similar sync problems. Gerstein then turned to CompanionLink to solve his BlackBerry to Outlook 2010 sync issues. CompanionLink was able to sync Gerstein’s data within a few minutes.

DejaOffice is a contact-manager app suite with modules for calendar, contacts, tasks and notes. It is currently available at no cost for Android, iPhone and iPad.

You can read the full article here, and find more information about DejaOffice at www.dejaoffice.com 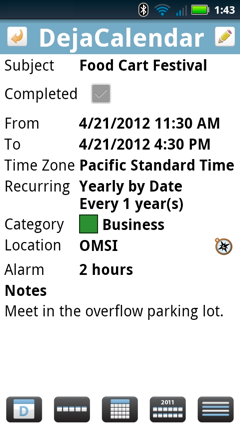 Yesterday, PC World writer Preston Gralla posted a helpful review of CompanionLink for Google. The review details the dilemma many users have in synchronizing their Android phones with Microsoft Outlook. CompanionLink for Google syncs Outlook contacts, calendar and tasks with any Google, Gmail, or Google Apps Premier account. Google can then wirelessly sync your Outlook data with most smartphones using the free Google Sync service.

Read the PC World article here. You can download a 14-day free trial of CompanionLink for Google at www.companionlink.com/google

A new review of CompanionLink has been posted over at the Windows Guides site. The review mentions, as posted earlier, that CompanionLink supports sync with Outlook 2010 64-bit. Head on over to https://mintywhite.com/software-reviews/companionlink-enables-sync-outlook-mobile/ to read the review.

We recently spotted a pretty detailed review of the CompanionLink software over at droidforums.net. Check it out, the review goes through the details of installation, configuration and support. There’s even a video walk through.